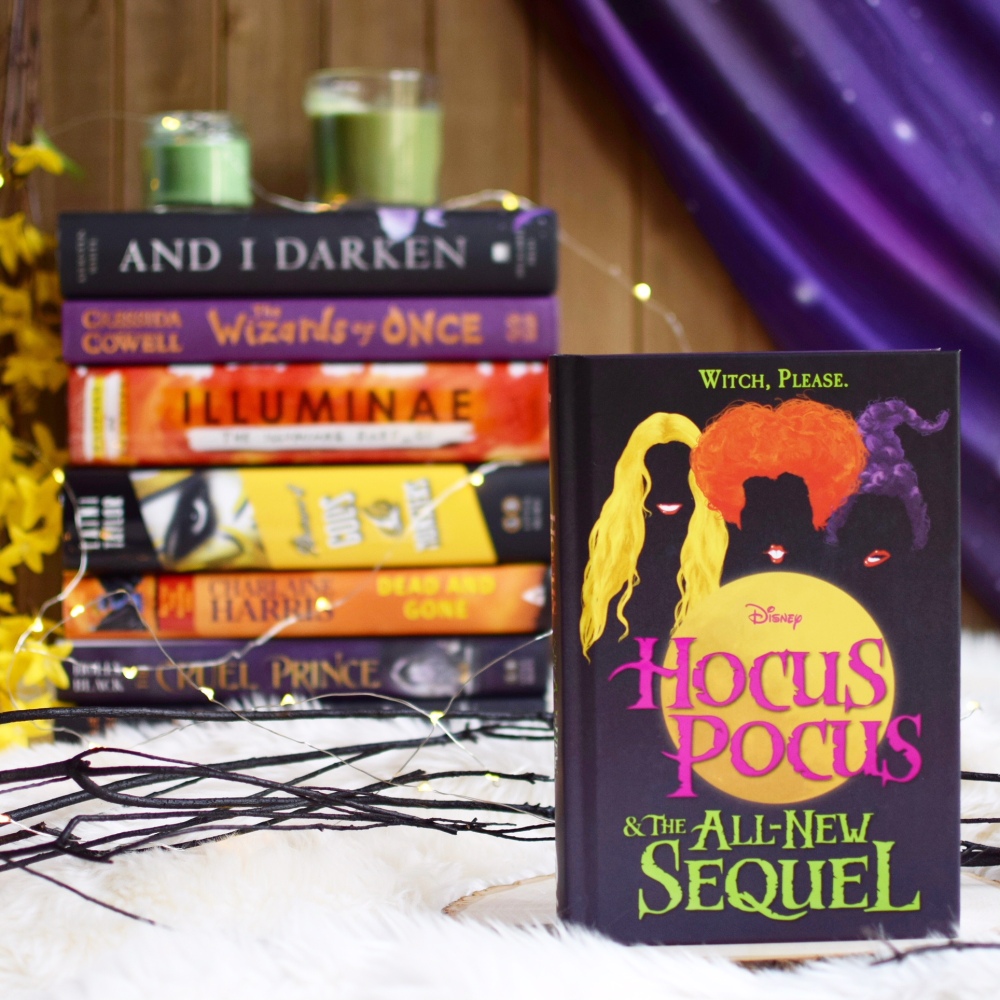 Genre: YA Fantasy, Halloween, Witches, Paranormal (reads more like middle grade level writing but main characters are teens so I think that’s why it was grouped in YA).

Appeal (in my opinion): Boy or Girl, ages 12+ or any fan of the original “Hocus Pocus” movie.

Conversations with Kids: If reading to younger children these are some topics that come up…. definition of “virgin”, spooky themes (presented with a comedic twist), kidnapping children, mild sexual innuendo, girl-girl love interest.

“Hocus Pocus” is beloved by Halloween enthusiasts all over the world. Diving once more into the world of witches, this electrifying two-part young adult novel, released on the twenty-fifth anniversary of the 1993 film, marks a new era of Hocus Pocus. Fans will be spellbound by a fresh retelling of the original film, followed by the all-new sequel that continues the story with the next generation of Salem teens.
–
Shortly after moving from California to Salem, Massachusetts, Max Dennison finds himself in hot water when he accidentally releases a coven of witches, the Sanderson sisters, from the afterlife. Max, his sister, and his new friends (human and otherwise) must find a way to stop the witches from carrying out their evil plan and remaining on earth to torment Salem for all eternity.
–
Twenty-five years later, Max and Allison’s seventeen-year-old daughter, Poppy, finds herself face-to-face with the Sanderson sisters in all their sinister glory. When Halloween celebrations don’t quite go as planned, it’s a race against time as Poppy and her friends fight to save her family and all of Salem from the witches’ latest death-defying scheme.

Is it coincidence that this book is released in time for the 25th anniversary of the 1993 cult classic film “Hocus Pocus”? I think not. Clever, clever Disney is big on anniversaries and rekindling old flames. Or BLACK flames in this case. Fans of the movie will likely appreciate this book. The first part is an almost exact retelling of the movie about the Sanderson sisters returning to Salem, Massachusetts after 300 years on Halloween night. There are a few additions for the sake of tying in to sequel. The sequel takes place on Halloween night 25 years after the original and follows Poppy, the teenage daughter of Max and Allison (yes, we all wanted them to get married and it happened!), her best friend Travis, and her love interest, Isabella. Dani, now the fun young aunt, is also back as well as…. Wait for it….. the Sanderson sisters.

The last 2/3 of the book is the sequel and it follows the same basic pattern as the original. The way the sisters were “awakened” in the sequel seemed less “believable” than in the original story (though even as I write that I laugh at myself for saying it). Some of the antics and phrases from the movie/first story get a little repetitive and “old” after a few repetitions. There are a few events in the sequel that differ from the original Hocus Pocus. They were set up in the Hocus Pocus retelling part of the story but die-hard movie fans may have mixed feelings about the appearance of a new character.

Keeping in mind the movie is PG, the book feels like a middle grade read instead of young adult. The vocabulary isn’t complicated, the violence isn’t too violent and the romance is mild. There was a fair amount of current slang terms and technology mentioned to bring the sequel in to the present, as well as a POC main character and LGBT relationship which are both themes become more common and normalized in current YA lit and IT IS ABOUT TIME!

Overall, I think fans of the 1993 “Hocus Pocus” movie will enjoy the book because it is so similar. Readers new to the story should go in to it expecting a mix of mild spookiness and somewhat juvenile humor and take the book for what it is… A light-hearted slightly scary Halloween witch story… times 2!

Thank you NetGalley and Freeform for sending me a digital ARC of Hocus Pocus and the All-New Sequel in exchange for my honest review. Finished copy was purchased at Barnes and Noble.